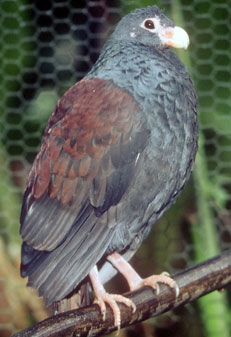 The Little Dodo too is an endangered species

It is said that 100 birds on this planet are on the brink of extinction.

The main causes as because their habitats are being degraded, they are being hunted and forests are undergoing deforestation by us humans.

Today there are many ways to prevent endangered species from undergoing extinction. Simply by increasing their population. However, it is clearly easier said than done.

Several countries like Nairobi and America have created national parks, nature reserves or wilderness areas to help prevent the extinction of animals such as the Chagos Marine Protected Area in the Indian Ocean. It is one of the largest Marine reserves on the planet.

Unfortunately, not all animals can be maintained. National parks too experience negative factors which can affect their aim of conserving the life of animals within its perimeters. Factors such as water issues and a more natural cause, climate change.

Click the following link to learn more about the Top 10 national park issues.

Another common way of preventing the extinction of animals is to make them populate. There are a large number of breeding programs around the world that ensure the increasing number within a species population. The Australian Zoo focuses on breeding a number of animals such as the Asian Small-clawed Otter and the Black Cockatoo.

Top 10 Birds in danger of extinction

1. Giant Ibis – There are only 200 of Cambodia’s national bird left and they’re losing numbers.

2. New Caledonian Owlet-nightjar – There may not even be 50 of this rare bird, last sighted over 15 years ago.

3. Californian Condor – There are fewer than 500 of this iconic vulture.

4. Kakapo- Although there are only 125 of this charming creature, its numbers are growing thanks to conservation efforts.

5. Kagu – There are a couple of thousand of this bird, native to the island of New Caledonia, but it is flightless and vulnerable to predators.

6. Bengal Florican – There may still be around 1000 Floricans, but the south Asian bird is dying out fast.

7. Forest Owlet – There are as few as 50 of this Indian owl following the destruction of its habitat. It was thought already extinct for over a hundred years before its rediscovery in 1997.

8. Philippine Eagle – There are only two hundred left of this majestic bird of prey.

9. Christmas Island Frigate – This east Asian bird is under serious threat from the introduction of yellow crazy ants.

10. Sumatran Ground-cuckoo – There may be as few as 70 left of this Indonesian bird.

Do you know what animal this is?

These extraordinary animals are marine animals. A 10-year mission discovery conducted by several institutions have uncovered the looks of vampire squids, to the Dumbo octopus with flying ears.